Monday’s topic in Positive Psychology was the psychology behind emotions. One main point we discussed is that the human nature of the brain is to fixate on bad things, and so we need to try and find ways to reinforce the good things that occur. A suggestion is to keep a daily gratitude journal and write three things for which you are thankful each day. They don’t have to be huge things; they can be as insignificant as a  little interaction between two strangers that made you smile.

Kamilla talked about the movie Inside Out, which I have seen many times. (I recommend watching it if you haven’t already; it gives a really interesting perspective on the importance of emotions.) We often regard “bad” emotions as negative occurrences, such as crying. However, these instances are equally important to more positive emotions in terms of the body’s regulation. We learned today that instead of talking about emotions as either “positive” or “negative,” we should instead use the terms “adaptive” or “maladaptive,” as even the most adverse emotion can turn into a useful experience for something later. We end up growing more as people from emotions that feel negative in the moment.

In honor of the National Denmark Men’s Handball Team winning the championship this weekend, my Danish teacher brought the class celebratory coffee and chocolates, which was a nice surprise. She said the significance of the win was equivalent to an American national sports team receiving an honor at the White House—a big deal.

The other thing worth mentioning in my school day was that we had a guest speaker in Travel Writing, Thomas Ubbesson, who is a Danish journalist. He’s written several books, and he believes that the best way to find stories is to travel cheaply while staying aware of your emotions and senses at all times. At multiple points in his life, he has left his family for years at a time, hitchhiking to his intended destination (such as India), interviewing people, and writing there. His technique sounds interesting and very dedicated to his writing practice, but I can’t imagine ever doing anything like that. After he suggested that we all try to travel without our smartphones—alone—and hitchhike to find a story, a girl raised her hand and asked what he thought of female safety while doing this. Our class is all girls. He responded that people underestimate the goodness in this world and that we would not be in danger. I shared a few skeptical looks with my classmates, and I know I wasn’t the only one thinking that this world is not a safe enough place to travel in that capacity by myself. Nevertheless, he had an interesting presentation and perspective on writing.

This week, I decided to take a half-day trip on my free Tuesday with my friend Leora, who also does not have classes. We biked for over an hour each way to go to the Thomas on the Mountain statue, which is a piece made from all recycled materials. It’s enormous, and the idea is that it is purposely hidden deep in the park to invite visitors to explore nature along the way. There are six of these hidden statues. After our long bike ride along scenic water and beaches to leave the urban part of Copenhagen, we parked our bikes in the dirt and walked for a while to look for these statues. To get to the first one, we had to climb an extremely steep set of outside stairs, as well as a hill that seemed to go on for a while. Finally, we reached a beautiful area of shade covered by trees, letting in enough sunlight to create a glow of the mountain’s top. It was an incredible sight. We noticed people coming up from another side of the hill, so we ventured down and sure enough, there was a huge statue. I can definitely see why they are commonly considered to be hidden; with all the trees around, it almost blended in with nature from certain angles. We explored the area around the statue, and then we decided to eat our picnic lunch. Luckily, it was sunny out, but we were still freezing at the wooden table. We agreed to come back on a Spring day to find the other five statues when our hands were not frozen solid. Plus, the bike ride was half of the experience itself. We biked all the way back, and I made it home safely. I have to say that I am definitely gaining confidence in riding my bike here, though the Danes are still way faster than me.

On Tuesday night we tried another club known as The Old Irish Pub, which gave students free drinks until 11pm. Adina, Goldie and I had a great time dancing, along with Adina’s friends from home and some people we met along the way.

To end this post on the note from the beginning, three things I’m grateful for since the last time I posted are the ability to bike, learning from interesting guest speakers, and finding people here who share my desire to explore as much of this city as we can. 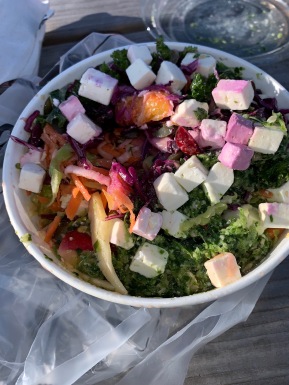 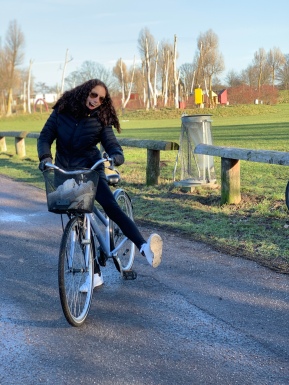